It was all go in my newly restored pond this afternoon. 12 newts chased each other round and round enjoying some hot love under the afternoon sunshine. 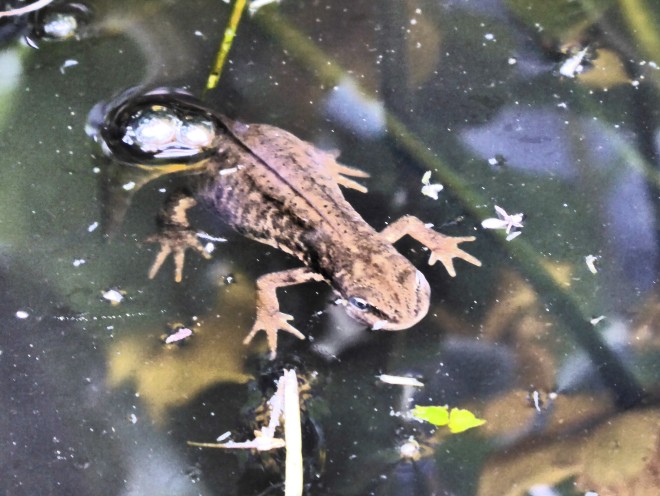 I was undoubtedly a strange child, the kind that makes their parents worry. I spent most summer days sitting up an apple tree in my parent’s garden, reading nature books and dreaming of such delights as owning my own newt!

Living in a suburb on the edge of London these creatures were a symbol of all the mysterious delights of the wild which were out there, somewhere, if only my parents would allow me to take off into the countryside and go and look for them.

I dreamt of  creating my own pond. I asked my parents if I could, they said no so I dug one in the neighbours garden instead. I figured they would never know. They were in their seventies, rarely went into the garden and never beyond the big privet hedge into the section which had once been the vegetable patch which had now run wild. I roped in my friend and, under my careful instruction, she dug a large hole and we lined it with some polythene I had found in my dad’s shed. I filled it with six watering cans fully of tap water and waited.

A few pond skaters arrived, a red wiry worm wiggled around, mosquito larvae came but no newt. The liner sprang a leak. I got up early every morning to wander up and down the garden with those six watering cans to keep the pond topped up. I waited, I hoped, no newt came.

One night there was a shout and a crash down the bottom of the garden. My neighbour had decided to walk beyond the privet hedge. He fell in my pond. Their was knocking on the door, a telling off, the pond was filled in.

Then, many years later, I owned a house of my own, I roped in some friends to dig a new pond. Under my careful instruction they dug a hole in the garden, I lined it with plastic, but better quality this time. The neighbours complained, fearing mosquitoes and inexplicably frogs, which they were terrified of. I waited.

The pond sprang a leak, but I fixed it. The water stayed high and the newts came, first one, then six, now they wander my garden. I find them under logs, I find them trapped in buckets of water. I rescue them. I delight in them. I think of that seven year old girl who dreamt of newts while sitting up the apple tree and I am happy.

It would be indiscreet to show them together and probably break some internet law.

Went pond dipping in the garden and came up with a newtlet. I was delighted but my Lithuanian housemate looked sceptical.

“What is a newt?” she asked peering into the murk of the pond.

“Like a small dragon,” I explained. “A small swimming dragon.”

She looked unconvinced. “Why don’t you get some goldfish?”

I will make a naturalist of her yet.