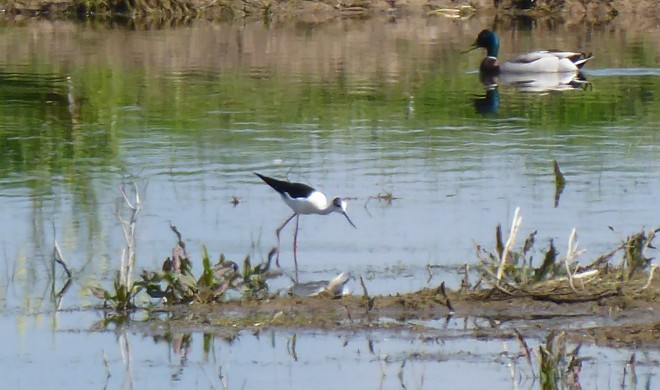 Some days it seems there is not much good news in the world but today I learnt for definite that two black winged stilt chicks, one of the rarest birds in Britain, have successfully fledged from farmland on Sheppey.

The adults have patrolled tirelessly throughout the year to drive off marsh harriers, buzzards and even the RSPB expert who came to see them.

They and the farmers deserve every bit of this success. These are the first birds ever to fledge outside of a reserve in Britain and, for today, that is enough to make me happy. 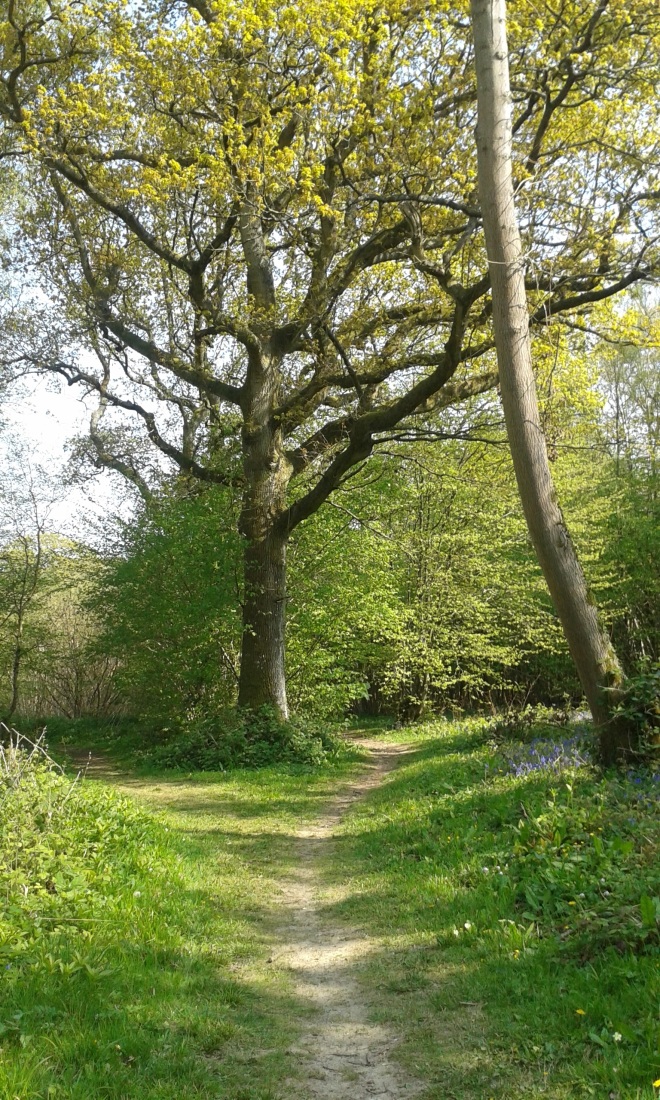 Enjoyed a wander in Earley Wood near Petham with my gang of volunteers from the Kentish Stour Countryside Partnership this week. 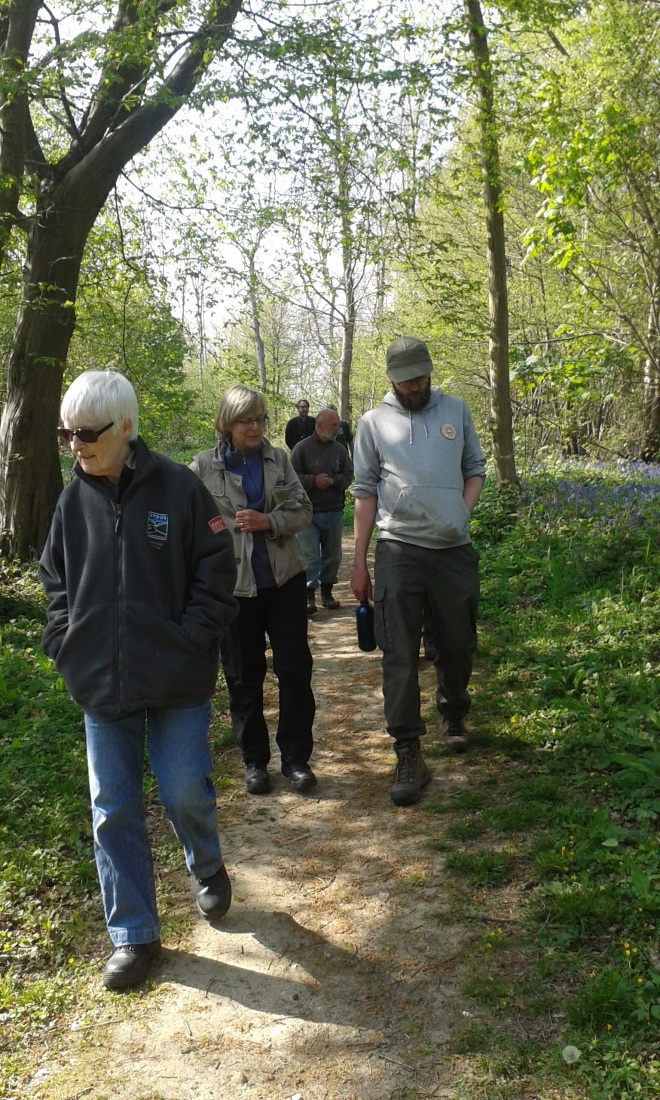 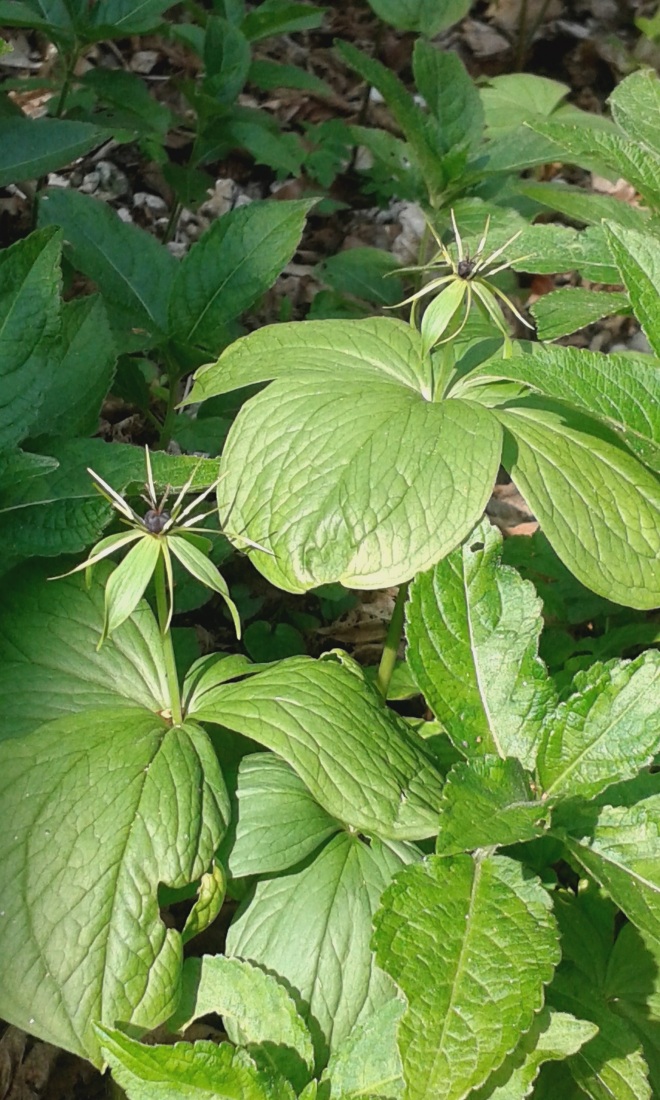 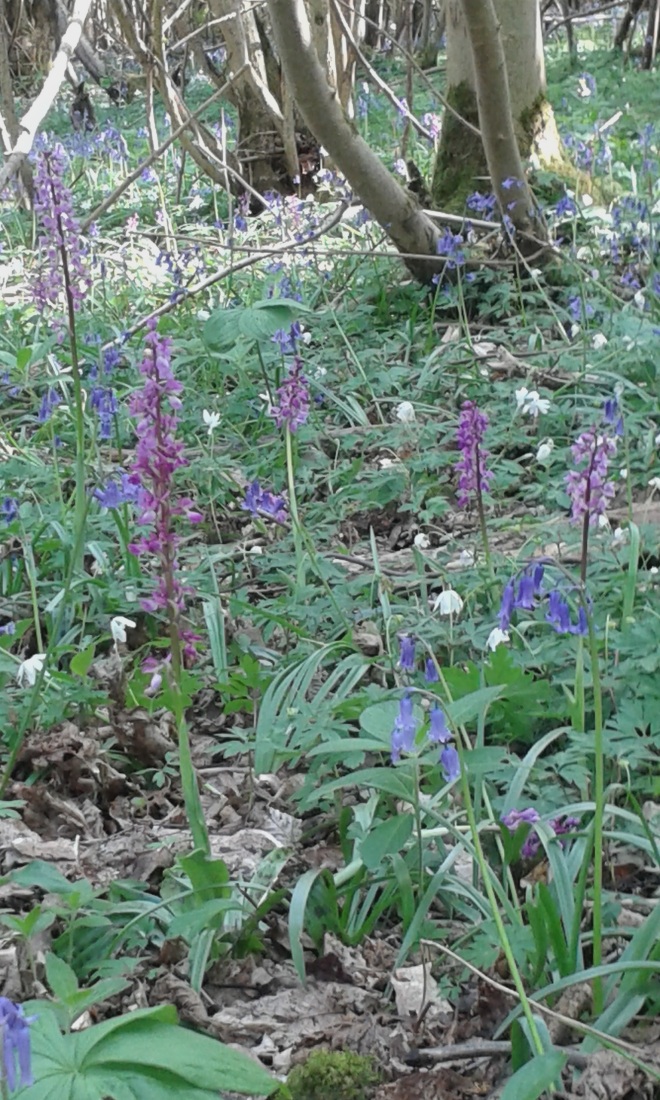 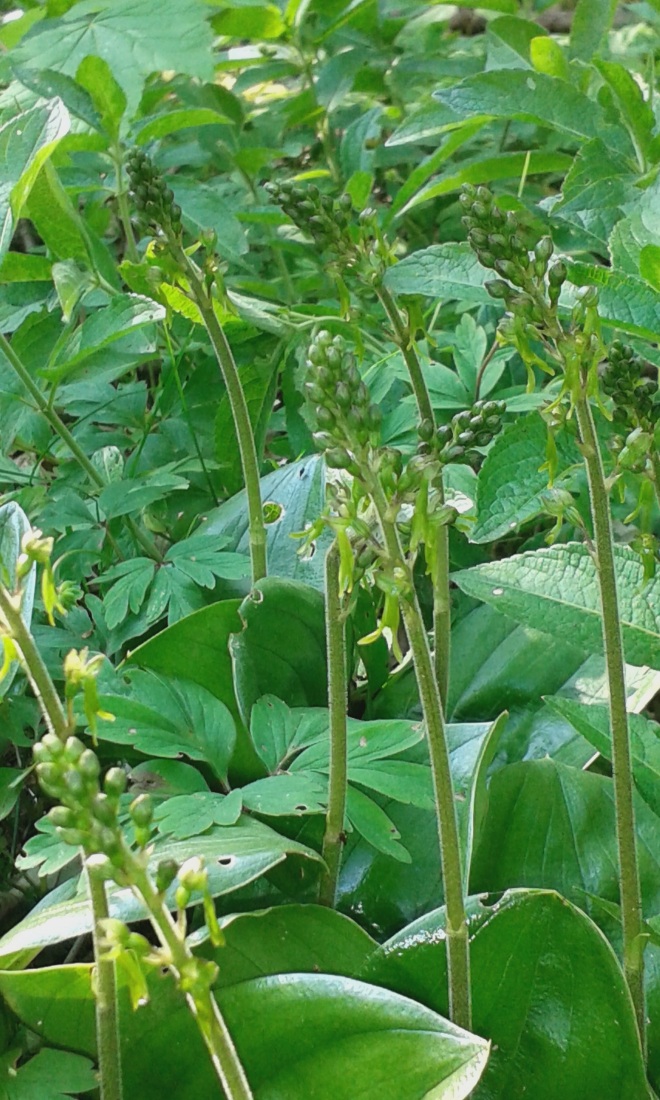 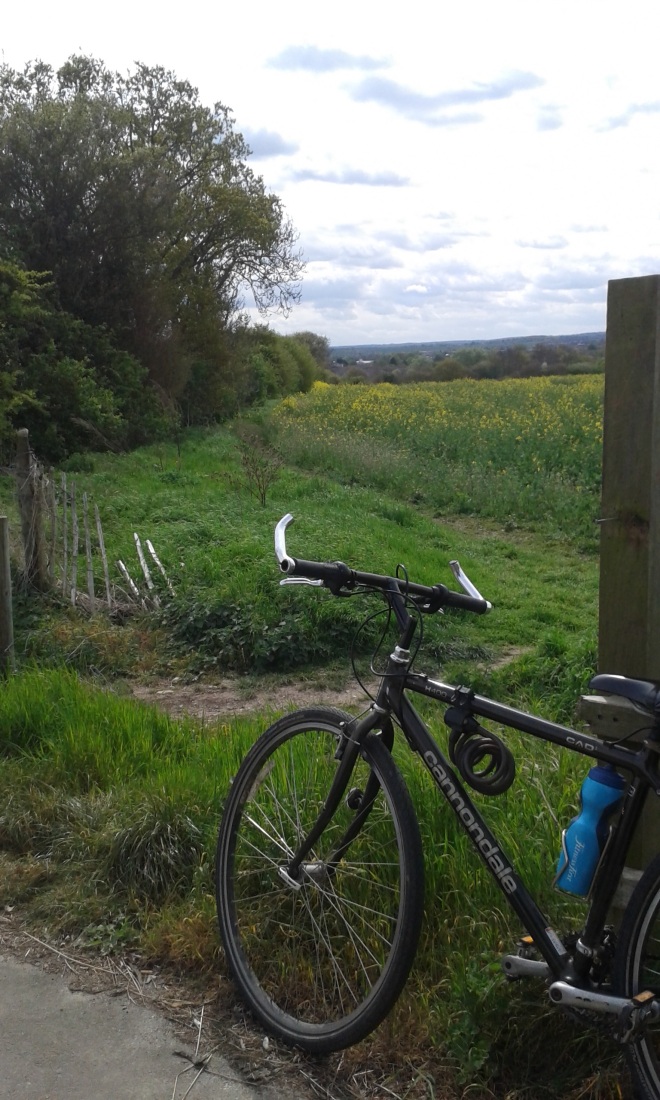 Green lanes outside of Sittingbourne

Bank Holiday weekend and everyone hits the road and spends the weekend stuck in a jam on the motorway. Instead I decided to discover the delights a little closer to home and caught the train to Sittingbourne with my bike.

Sittingbourne is not an obvious tourist destination but a short cycle from town is Milton Regis, an ancient settlement with a high street of beautifully preserved buildings and the fabulous medieval Milton Court Hall. Here, at Easter, the local judge would preside over cases seated in a high chair in the upper storey. The hall is open every Saturday from April to September. Don’t forget to ask the friendly volunteers to show you the tiny town gaol with its unfortunate resident. 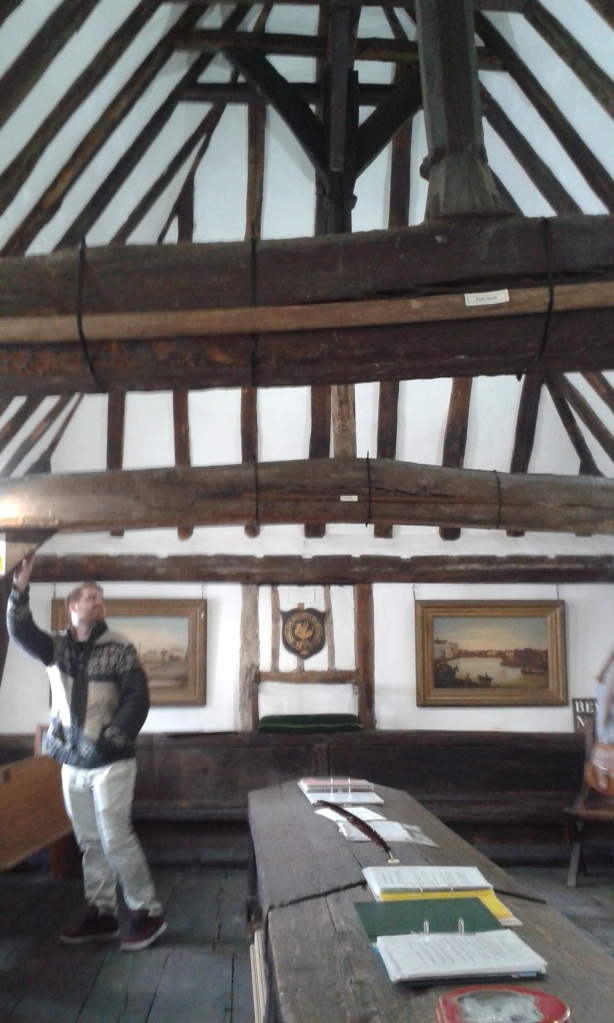 My old OS map drew me across the railway and the M2 towards two hamlets called Upper Toes and Nether Toes. Who wouldn’t want to visit such places? Unfortunately the modern maps seems to have done away with these names and grouped the places together under Howt Green.

Luckily apple orchards and quiet country lanes still exist just outside Sittingbourne. With the ever encroaching threat of housing the get out and enjoy them while you still can. 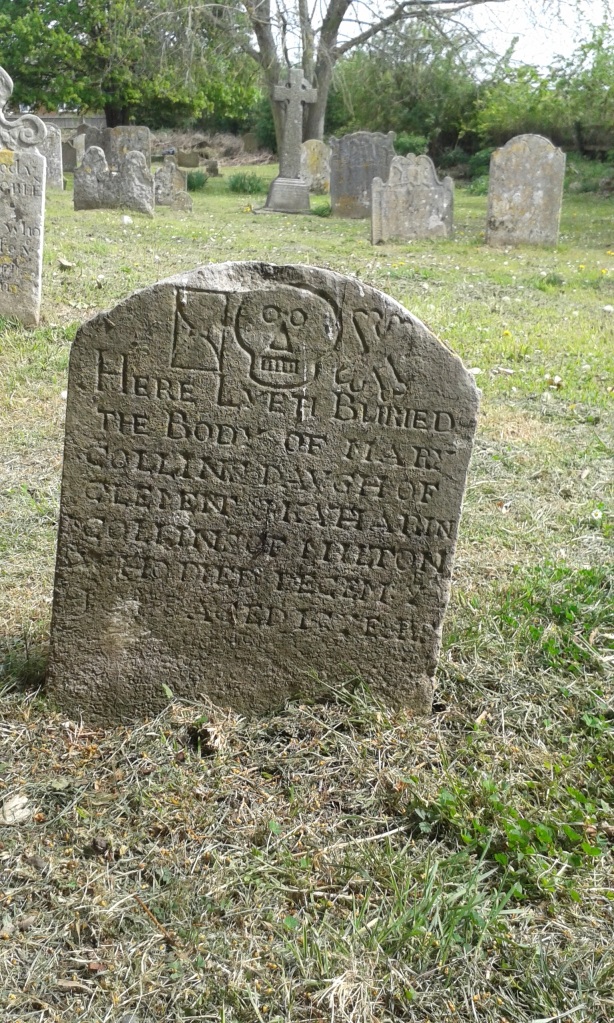 I finished my trip with a visit to the beautiful Holy Trinity Church, one of the oldest in Kent. Built on a site of pagan worship the churchyard is a gem of ancient headstones, including one from the 1600’s of a boy who was killed on Guy Fawkes night by an exploding rocket.

Why spend Easter stuck in a car, polluting our countryside with exhaust fumes only to arrive hot and bothered in a crowded location? Instead step back in time, catch a train, dust of your bike and discover the things right on your doorstep. 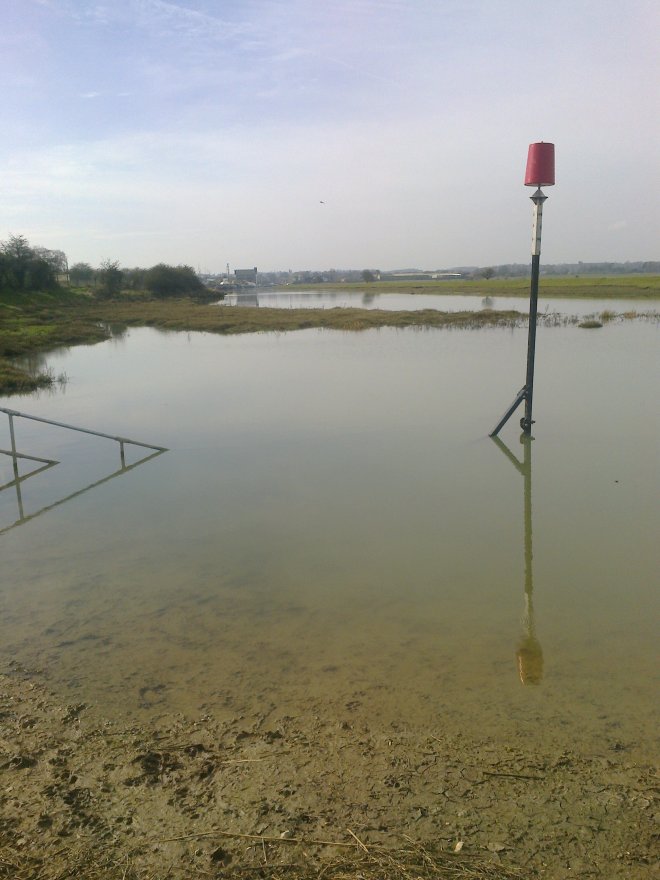 Looking back to Iron Wharf from Faversham Creek

Today I cycled out from Faversham and fell back in love with my country. 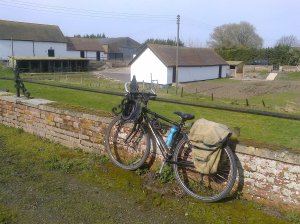 despairing at the destruction of our countryside. At times it seems that we have become one big building site and ugliness both physical and ideological threatens to engulf us.

Today however I remembered all the good things as I weaved past the lively market and down to the boatyards of Iron Wharf where people clambered over their weekend projects with renewed enthusiasm because the sun was out and the days were getting longer. I then crossed a ever more rickety bridge over a creek and spun across Nagden Marshes. 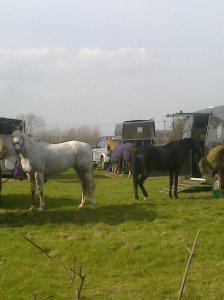 Spring in England is a blessing which you can enjoy all the more after the gloom of a long winter and, even these days, when winter is not what it was, then I can revel in the first sun on bare skin. I fully subscribe to Robert Browning’s philosophy in his poem ‘O to be in England.’ and never wish to live full time in a country where the summer is endless. Like many things in life the joy of pleasure returning is all the sweeter when you’ve come through the dark days.

Away from the banks of Faversham Creek  I swung down 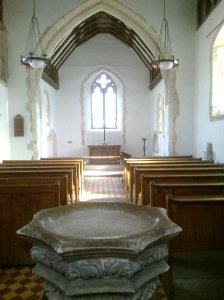 quiet lanes, passing farm workers, horseshows and stopped at St Bartholomew’s Church in Goodnestone run by the Churches Conservation Trust and stepped inside to discover it’s simplicity and cool whitewash. On, past quirkily named pubs and first pints of shandy back to town. The world had gone all John Betjeman and I was thankful for it. 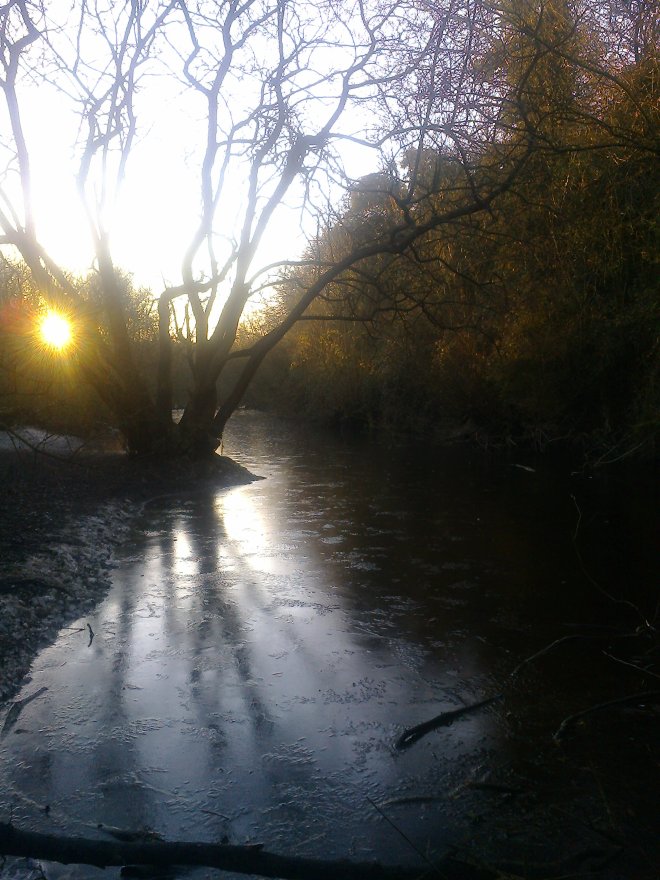 If Tolkien hadn’t imagined Middle Earth at Moseley Bog outside of Birmingham then he would have found his inspiration at Berengrave Nature Reserve near Rainham in Kent.  A chalk quarry where spider trees rise from a flooded floor, ice covers crystal clear lakes and tangles of debris hang from the branches as if we were in the Louisiana bayous. 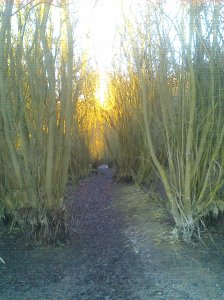 It is not a cosy place of well tended trails. It is a place of magic and myth and dark thoughts. Never sunlit, even in the heat of summer. A place of silence and uncomfortable feelings. A place to drown your sorrows or your body in, your last word escaping in a bubble beneath the ice.

It is the cut through on the way home which causes children to quicken their step. It is a Boggart hole. May its secrets persist. We need the darkness on the edge of town. We need the wildness more every day. 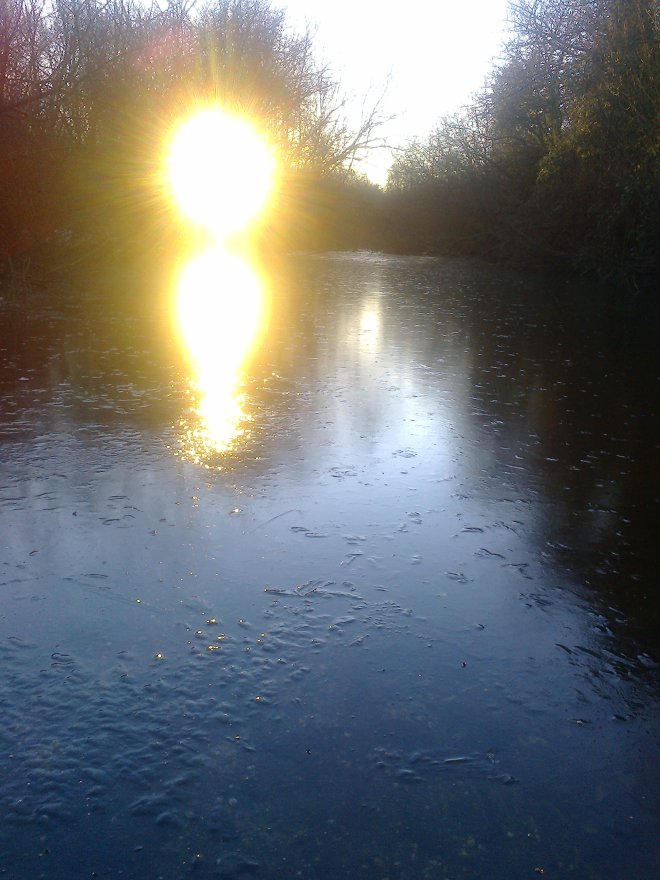 Bakersfield, the brownfield site at the end of my road which was home to hedgehogs, little owls, nightingales, lizards, snakes and turtle doves have been destroyed. I tried to stop it, I couldn’t, but the fact that I tried, helps. Please watch this video and write to McCulloch Homes and Bioscan to condemn their actions. 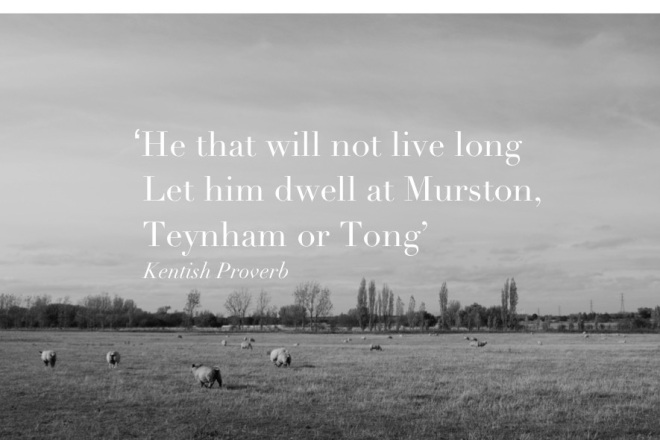 August 2016 – Messing about with our rivers

The sun shone throughout August as we continued with our work to re-survey rivers and drainage channels for the River Stour Internal Drainage Board. Repeating a survey we originally done six years ago shows the changes in land use and how this impacts on our waterways.

The loss of many grazing meadows is particularly a cause for concern as grazing allows a rich diversity of plant life to flourish and creates a tangled fringe of vegetation which provides a microclimate for insects.

We have found that some of the meadows which were originally grazed by cattle have now become unused. Development companies have bought up land on the edge of towns and villages and leave these fields ungrazed while they attempt to get planning permission.

With the cessation of grazing, plants such as tubular water dropwort have become outcompeted by more rigorous species such as common reed and banks become dominated by thistles. In other fields a change from grazing to arable has resulted in more fertiliser use, which has caused nitrate levels to rise in ditches leading to an acceleration in weed growth.

Throughout the coming months we hope to work with landowners to look at ways of reducing run off and improving rivers for wildlife.

Cutting a river channel by hand

This month we have also been working with Rhino Plant, the River Stour Internal Drainage Board’s contractor as they begin the annual weed cutting of channels. Where access for machines is too difficult the rivers are cut by hand with scythes. The guys involved in this work have to have plenty of strength and stamina to undertake the physical demands of cutting and hauling the weed onto the banks.

Our work involves advising on Biosecurity to avoid the spread of crayfish plague which can be transferred from introduced signal crayfish to our native white clawed crayfish with devastating affect. We encourage contractors to check clean and dry their equipment and spray with a iodine solution to prevent disease spread.

We also look at ways of using the weedcut to create meanders and improve the flow of rivers, creating diversity in the channel which allows aquatic insects to thrive and fish to spawn.

Restoring the health and vitality of our rivers will prevent flooding and provide clean water as well as allowing people in towns to enjoy a therapeutic slice of the natural world.

So many butterflies at Queendown Warren in Kent on a warm Bank Holiday Monday, they spun before my eyes as I fell asleep. 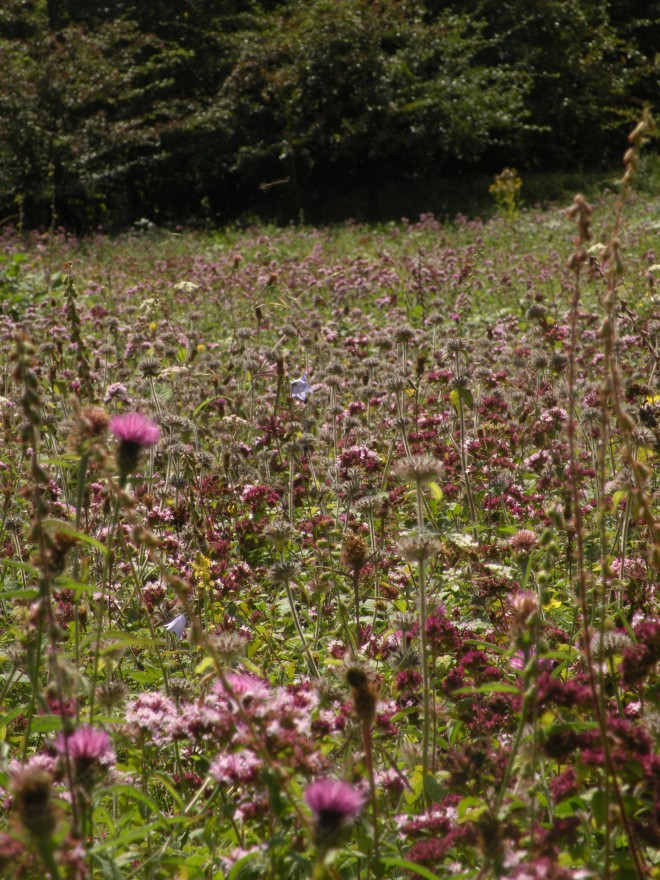 Marjoram, knapweed and harebells at Queensdown Warren. A good source of nectar for butterflies 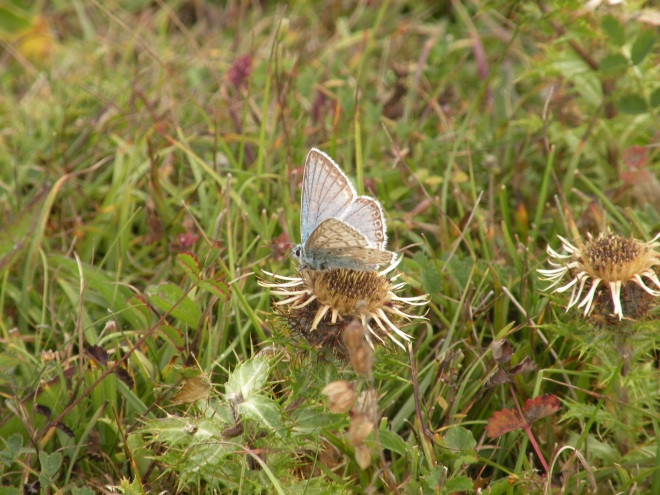 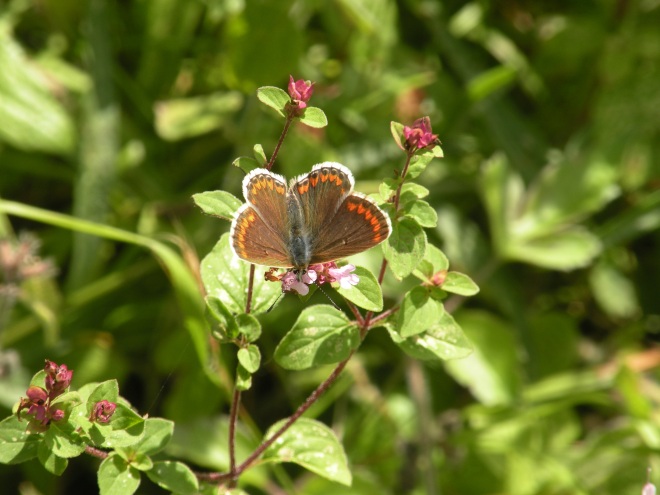 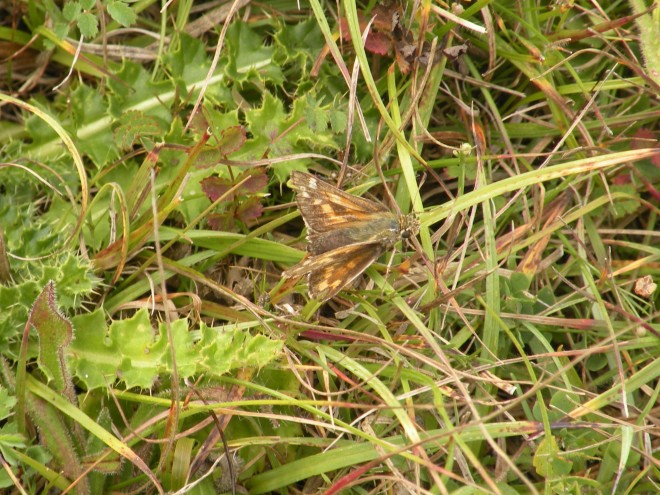 Silver spotted skippers were harder to spot but this one was obliging. 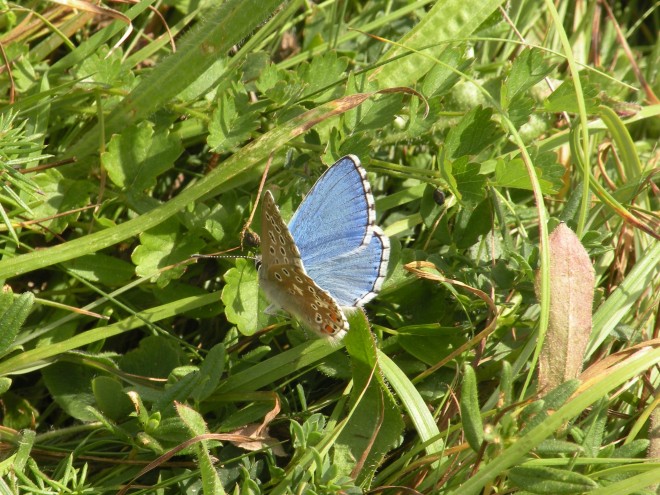 The eye popping Adonis Blue is easier to see. 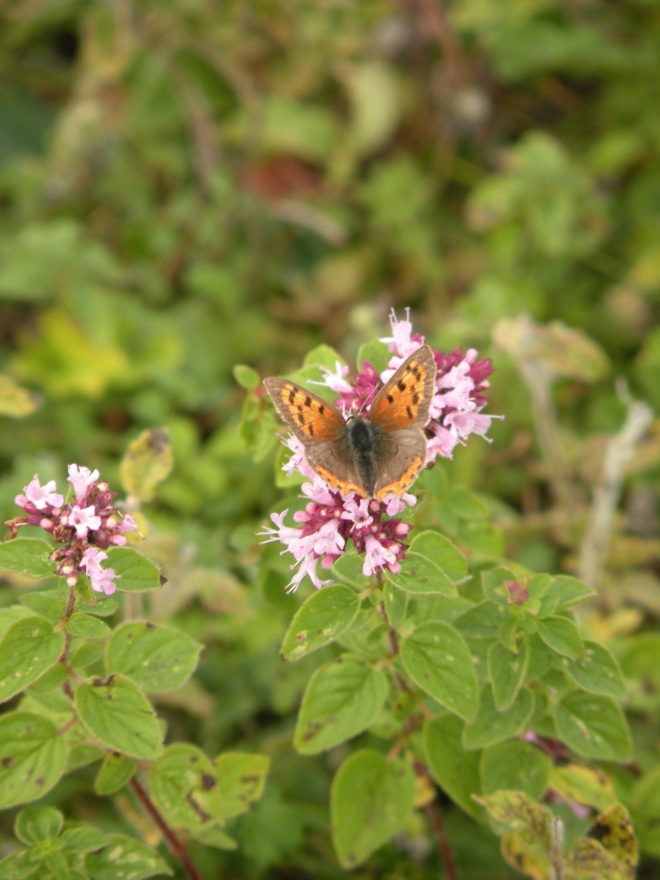 My favourite butterfly, a Small Copper, the only one I have seen this year. 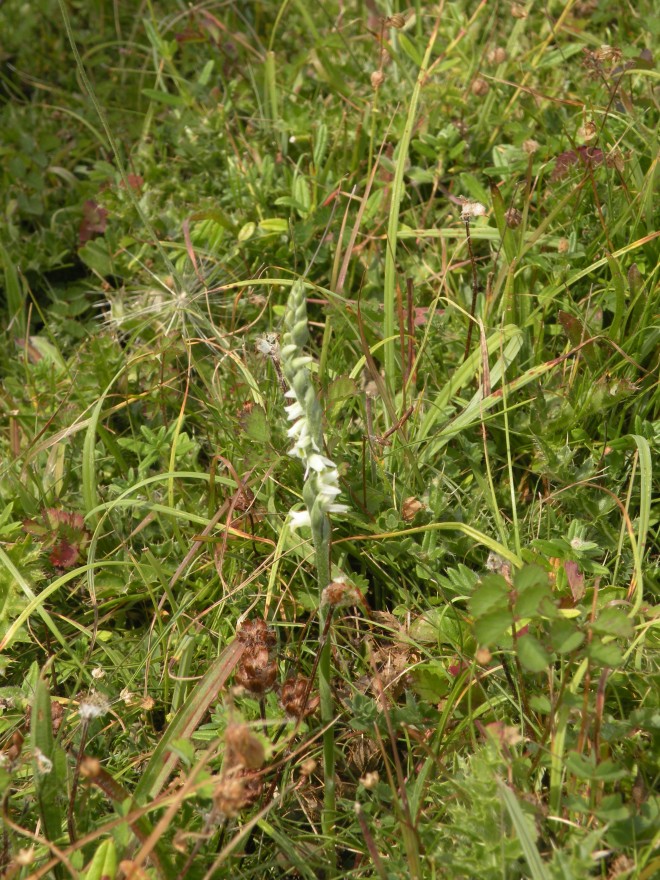 It is easy to miss this tiny orchid while enjoying the butterflies but Autumn Ladies Tresses is one of the speciality plants of the site.

July began with an excellent day of survey work alongside County Recorder, Sue Buckingham on the Ash Levels, to the East of Canterbury in Kent. The Ash Level Feed Dyke is one of the most botanically rich drainage dykes managed by the River Stour Internal Drainage Board and therefore it is important to get management right to ensure that rare plants can flourish. Carol Donaldson surveyed the watercourse in 2010 and was keen to return to see how changes in management had affected the channel. Sue’s expert knowledge helped to identify a range of uncommon plants such as divided sedge, rootless duckweed and tubular water dropwort. 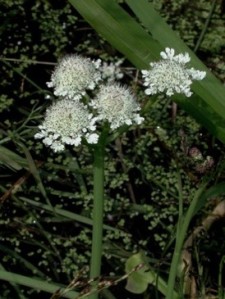 Carol J Donaldson Associates have worked hard to forge links with other conservation organisations and submit all records to the British Trust for Ornithology and Kent and Medway Biological Record Centre. “Working with Sue Buckingham and Kent Field Club is good for everyone.” said Carol. “The Internal Drainage Board benefit from specialist recording skills and the recorders get contact with landowners and access to areas of land away from public rights of way.” This mutually beneficial partnership allowed Kent Field Club to survey another IDB channel in July and discover several plants of tufted sedge (Carex elata) which had not previously been recorded in this area. 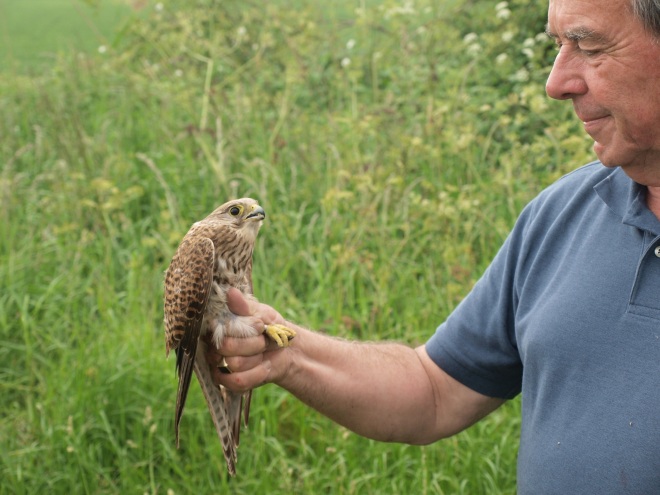 Another mutually beneficial partnership has been formed with Kentish Stour Countryside Partnership. We volunteered our time in July to help with the barn owl ringing programme , visiting some of the many boxes installed by the partnership across East Kent. The day provided an insight into the life and death game sometimes played out unseen. We were amazed to discover two barn owls feeding on the remains of recently predated kestrel chicks. It was an extraordinary example of the food chain in action. Adult kestrels are feisty birds and the predated chicks were almost full grown. We can only speculate that this was a chance encounter where two barn owls had investigated the box and happened upon the chicks while the parent was away hunting.

Finally this month we conducted a training day for Rhino Plant operators on behalf of the River Stour Internal Drainage Board. The day was designed to give the operators who manage the drainage channels an insight into the survey work conducted on the marshes and an understanding of why decisions are made to change the way the ditches are cut and de-silted. It was an opportunity for both sides to learn about each others roles in maintaining the channels and work together towards getting a good balance between the needs of drainage and the needs of wildlife 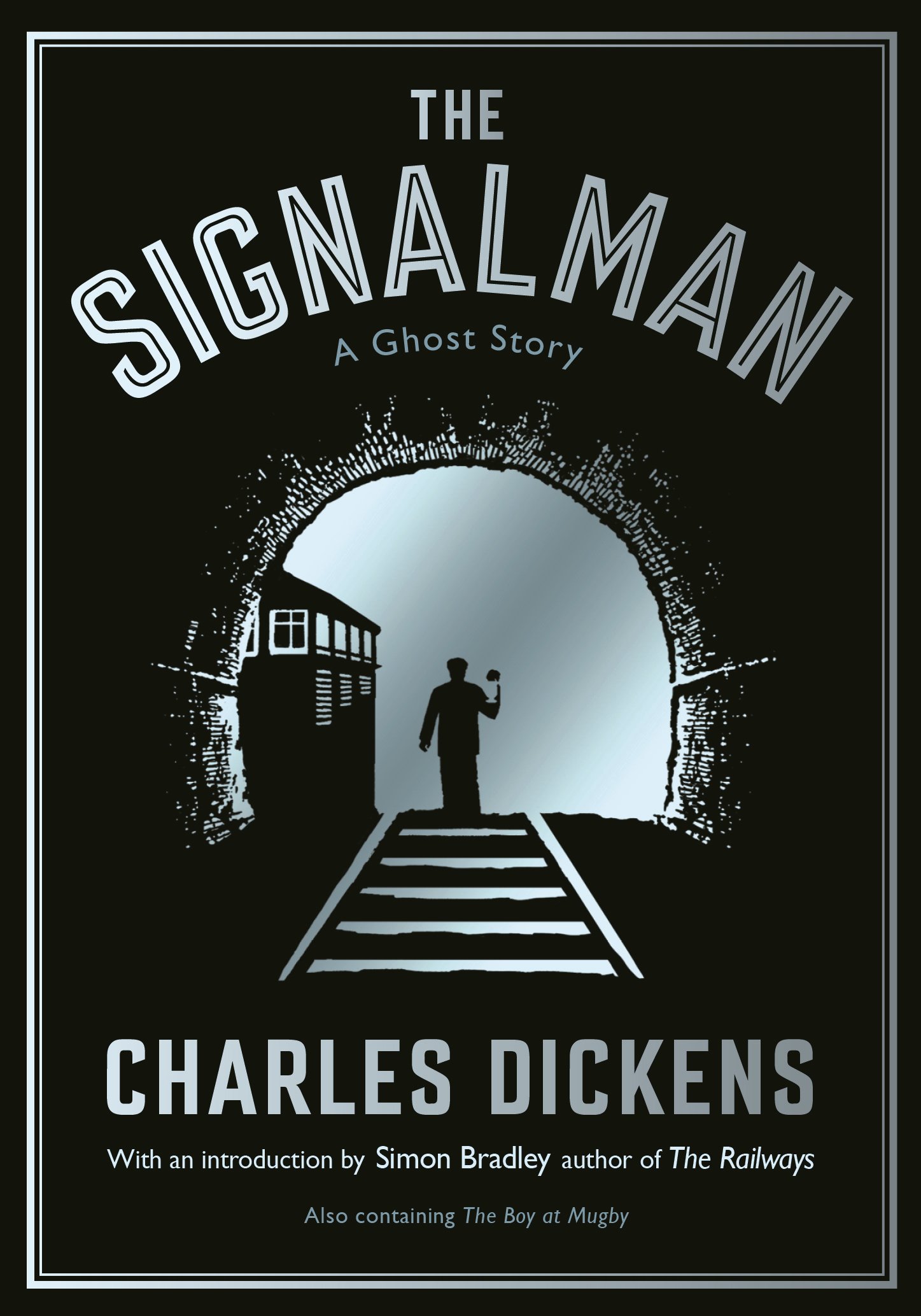