apples in my cellar

Who in their right mind looks forward to a British winter? Endless nights, endless rain, streaming colds, mud and no hint of warmth. Not me for one. Despite the joys of hot chocolate and starry, starry nights and watching the snow fall, our winters just go on too long.

But preparing for winter is a different business altogether. I love this time of year, of harvest and golden days and the smell of ripening fruit and I love being part of the season and the feeling of taking in the bounty of the land and preparing for the cold.

Today has been the most glorious autumn day and I have stocked my cellar full of apples. Some picked from a local community orchard where I braved the daddy long legs to gather coxes and russets from the trees I had pruned in the spring and some scrumped from my neighbour which involved climbing on the roof of the summer house and leaning precariously out over their garden.

I have stewed apples and bottled elderberry elixir, a dangerous mix of elderberries, spices and dark rum, guaranteed to keep any cold at bay. I have squeezed the rose hips to test their readiness for syrup making and tasted my first batch of blackberry jam. I have smelt and sipped and supped the season. I have felt the cold pick of ice in the evenings, I have watched the moon rise, I have felt the season turning.

all creatures great and small. No targets to protect them at all. Image – Carol J Donaldson

Did you know that the UK no longer has a Biodiversity Action Plan? Forgive my ignorance here but I didn’t. Despite the fact that I have worked in conservation for at least 15 years and spend day in day out at the coal face trying to protect our habitats and species then I didn’t know that all the aims and targets for the things I most care about had been swept away.

Nor, it seems, did most of my colleagues. Maybe this is our problem, our noses are to the ground, trying frantically to protect what’s left and we don’t look up and see that we are living under a government determined to undermine our work.

The United Kingdom was the first county in the world to produce a Biodiversity Action Plan following the Earth Summit in Rio in 1992. This is something to be proud of. The BAP provided detailed targets of how we were going to halt the loss of biodiversity and action plans which could be used to protect the most precious and threatened species and habitats. We failed to do this. No British Government cared enough to stop the loss of biodiversity but at least we still knew what we were aiming for and roughly what we should do to get there.

Now it seems, quietly, without fanfare, we have lost our direction. In 2011 the new Tory led government scrapped the UK’s Biodiversity Action Plan, closed the website, along with a whole host of websites belonging to its environment and nature conservation agencies and sent letters out to say that all the habitat and species plans and targets so carefully worked out by experts were no longer relevant. What was put in their place? seemingly nothing.

The UK Bap was replaced by the snappily titled, Post 2010 Biodiversity Framework and a document was produced which had lots of nice waffle about how marvellous we were all doing but had no meat on the bones to say how we planned to make things better.

It is easy to lose your way under the governments new plans for biodiversity.
Image MLP

Wading through the website of the Joint Nature Conservation Committee, who advise the government on nature conservation, is like walking through a forest of birch trees on a very foggy day. Shapes loom out at you but, before you can determine what they might mean, they are lost. Am I just being cynical when I begin to feel that this opaqueness might just be on purpose? You are not meant to find the information you are looking for because it doesn’t actually exist.

JNCC staff seem equally confused. When you ask them what has replaced the plans which once laid out how we were going to protect everything from the brown hare to an obscure pea mussel they seem unsure and take your e-mail address with promises to get back to you. Finally you might be directed to a web page  which nowadays only gives you a list of important species, tells you the many reasons they are struggling to survive but gives you no idea what we are doing to stop their loss.

On a local level, things are different. Professional and amateur naturalists, county recorders and wildlife interest groups work frantically to protect their local patch but most of these people are voluntary or woefully underfunded and increasingly they are also portrayed in Government rhetoric as the enemies of the country. These are the people who stand in the way of progress, growth, development. These are the people who put a spanner in the works of housing estates being developed on green spaces and rich men getting richer.

Conservation, wildlife, biodiversity and those who seek to save it have become, it seems, the enemy of the Government and the Government has picked away at the strings and science and laws that once protected it. There is no UK plan, no joined up thinking and maybe this was the plan after all. Un-united they hope we might just fall.

Today I went to the hills and found a sacred place.

Having fought my way up a steep climb on my bike, I was almost toppled into the road at the sight of a gnarled, many branched oak tree. It stood opposite the entrance to an ancient track, not marked on my map as a footpath or bridleway but unmistakably a track where people had walked for maybe a thousand years. The track was sunken, lined with the remains of a laid hedge, fused at the base into shapes to make Henry Moore weep.

Do you know when you’re entering a sacred place? I did. Two twisted hornbeams marked the entrance to a grove of  beech trees, the Queen tree, a female place.  A once pollarded hornbeam, its many dark limbs reaching up, grew to one side. A mossy trunk lay prostrate at its base, serving as an alter, alive with an offering of waxy white, sacred white, wet and dewy toadstools. My camera refused to work, it was not a place for the modern world.

God was here, in this spot and I thought, ‘be careful what you wish for in sacred places.’ The air heavy with folklore, goblins, mischievous forest faces, likely to twist your hopes. I wanted to wish but I resisted. Warned not to, I listened. You cannot capture another human being with a wish.

God is in the woods but we are still free to choose our path.

On Sunday 11th October there will be another chance to take part in a writing workshop with me. I am running a 2 hour nature writing course at Sun Pier House in Chatham, Kent ME4 4HF between 10.00am – 12.00pm at part of the Rochester Literature Festival.

We will be taking a stroll to get some inspiration for our writing from the riverside setting and learning more about the essential elements of good writing.

Tickets cost £5. To book a place please visit this link

The sun made a rare appearance after, seemingly, weeks of rain on Wednesday and I was tentatively hopeful that our planned reptile hunt across Hambrook Marshes and Bus Company Island in Canterbury might prove successful.

Andrew Wilkinson from Kentish Stour Countryside Partnership explained the need to monitor reptiles at Hambrook to get an idea if their management of the site was successful.

To begin with, things did not look hopeful. We poked around under a variety of tins, roofing felts and tiles on the steep former railway embankment seeing little more than a slug and a fat spider but then Andrew gave a shout. Unfortunately, by the time the rest of us had scurried over the common lizard had scarpered.

However, down in the meadows we had better luck and a common lizard posed helpfully on a tree stump while it was ‘papped’ by the long lenses of fellow volunteers, Chris and Tim. 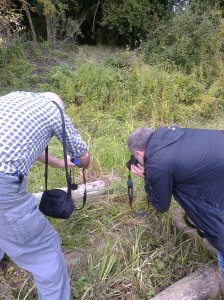 The sun was warming up as we travelled to Bus Company Island, a hidden reserve tucked away in the meeting between two branches of the River Stour. The site hadn’t been managed for some time and we ploughed through thickets of nettle and bramble working our way around the site. However we struck lucky. Tentatively pulling back the first mat, we saw a field vole run for cover and further along encountered a beautiful young slow worm. 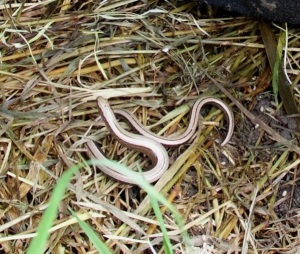 Tim, who had spent a childhood hunting reptiles in the quarries near his home, was particularly delighted, as he hadn’t seen one in years. However, sometimes nature wants payment for its pleasures as Tim was to find out when we ventured onto the boardwalk above the pond.

As we peered over the edge of the dipping platform we heard a loud crack. Me, Chris and Tim were all thrown sideways as the platform gave way beneath us and Tim vanished feet first into the muddy pond. We all grabbed each other and Jenny, who had sensibly remained on the bank, and hauled ourselves out. Tim emerged, with a boot full of mud and squelched back to his car. Reptile hunts, like bear hunts are never easy.